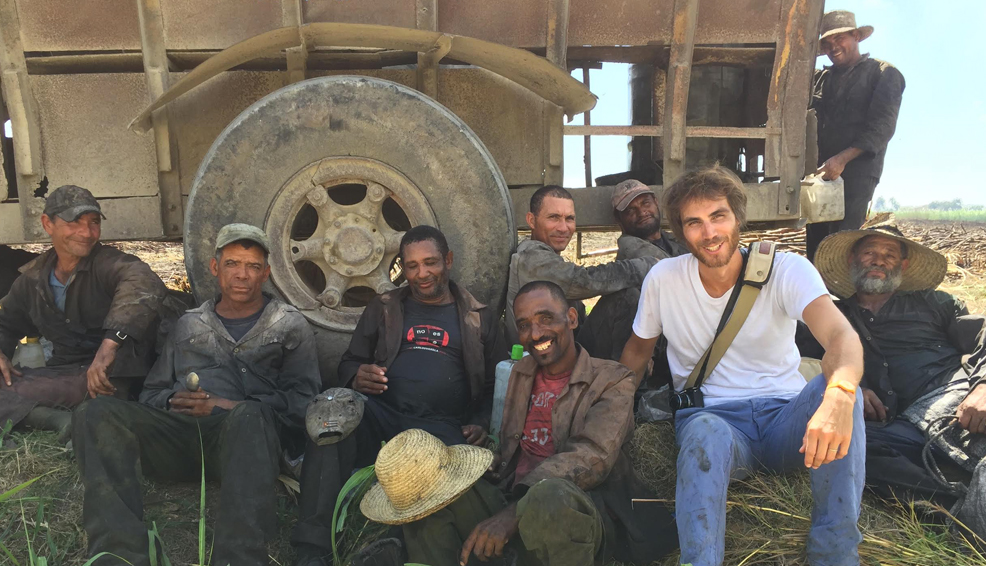 Pierre-Elie de Pibrac was born in Paris in 1983. In 2007, he made his first report in Myanmar. His first images won several prizes and competitions organized by magazines like Paris Match and Photo, or mobile phone companies such as Orange and SFR. In 2009, Pierre-Elie worked side-by-side with leading photographers from the Vu’ agency, such as Denis Darzacq, Claudine Doury and Rip Hopkins. The same year, soon after graduating from a renowned business school, EDHEC Business School, he decided to devote himself fully to photography. He is the grandson of the photographer Paul de Cordon.

Pierre-Elie produced his first large-scale series in New York in 2010 based on the theme of photographic perception and objects. Bearing the titles American Showcase and Les Frontières de la Perception (the Edge of Perception), the project was very well received by the public and press, and resulted in the production of a book called American Showcase, published by Archibooks. The book showcases Pierre-Elie de Pibrac’s emerging trademark: beyond the subject being dealt with, the photographer seeks to transform the image by inventing new concepts with which to make his own mark. The audience discovers a “photographic object” whose aesthetic rendering brings to life a totally unique and puzzling perception.

Pibrac exhibits his works in France and abroad in numerous galleries and prestigious venues like the Grand Palais in Paris. His work has also been on display at various fairs such as Cutlog and Paris Show Off during the FIAC! 2010 international modern art fair, the Lille Art Fair in 2010 and the Brussels AAF in 2012.

With an ability to move energetically between different photographic realms, the photographer Pierre-Elie de Pibrac decided during the 2013-2014 season to follow the ballet dancers of the Opéra de Paris. Immersed in the life of the dance company and behind the scenes of the Garnier and Bastille operas, he adapted his lens with great sensitivity to the subject at hand.

The Confidences series is made up exclusively of black and white photos and films. In the two other series presented as part of this work, he uses colour.

By means of a certain technique and new way of seeing, Catharsis highlights the abstract nature of the image. This series is the fruit of research carried out on transcribing the energy emitted by the dancers and spreading it out in space. Ballet’s power is revealed to the audience in a new, transcendental way.

Analogia illustrates in 14 works the sustained echo within the walls of the majestic Palais Garnier and the dancers of the ballet company. Photographed with a rigged view camera, this series highlights the immenseness of this theatre and its influence on the dancers who move about within it.

From november 2016 to june 2017, In Situ has been showed at La Havana, at the Casa VIctor Hugo. This exhibition was the biggest photo show ever done in Cuba.

From October 2016 to June 2017, Pierre-Elie de Pibrac spent 8 months with his family in Cuba to realize the Desmemoria project, a testimony, both anthropological and social, about the life of the Azucareros, a people from sugar, living for the sugar and revolutionary of the first hour. Through this testimony Pierre-Elie opens a reflection on the identity of Cubans and the influence of sugar production on it. He won the Prix Levallois with this project. In 2019, Pierre-Elie released the project book with the editions Xavier Barral  and won the 2020 HIP Prize for the best photo book in the “report and history” category. Desmemoria will also be nominated for the prestigious Prix Pictet in 2021.

From December 2019 to August 2020 Pierre-Elie lived for 8 months with his family in Japan to work on his project entitled Hakanai Sonzai which means “I myself feel an ephemeral creature”. This project tells the story of individuals who seek to understand their identity in the face of the weight of the rules of the society in which they operate through the notion of Mono no Aware, which represents sensitivity for the ephemeral, vanity and the impermanence of everything. A set of portraits from this project was awarded at the prestigious Taylor Wessing Photographic Prize from the National Portrait Gallery in 2021.

Pierre-Elie is represented by the VU’ Agency.